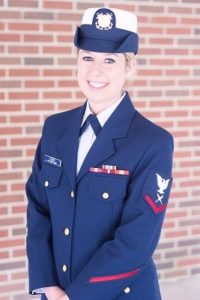 I joined the Colonial Branch Chapter when I first reported to Training Center (TRACEN) Yorktown in July 2015. I wanted to be a part of something larger than just my primary duties as a Servicing Personnel Office (SPO) Technician. I volunteered for everything I could, and created our first Branch Award that was ever submitted by the Colonial Branch Chapter. While preparing this award I had little knowledge about the CGEA and all it has to offer. Our hard work on the book had paid off, and our Chapter placed second with all the amazing things we accomplished. After achieving second place with little knowledge about how amazing the CGEA really is, I became inspired to do something great. When it was time to elect new officers, I ran for Vice President and Secretary. I was elected to the position of Secretary. With my inspiration in mind, I made it a mission to be more involved with social media for our Chapter on and off base and especially in our communities near and afar. A couple examples of this are everything from attending and participating in a flag laying ceremony in the Yorktown battlefields to helping with the hurricane relief efforts in Puerto Rico.  We now have over 100 followers on Facebook and are continuously growing. I’ve made it a mission to encourage all of our members to be on the same page and keep them motivated; as well as letting our Shipmates around the nation know about all the great deeds our Chapter has done. In an effort to promote the CGEA, I volunteered to attend the student weekly indoctrination meetings at TRACEN Yorktown and speak to them about becoming active members. I believe my membership and my role as the Secretary is impacting the Colonial Branch for the better, and I will continue to do my part in improving our Chapter as time goes on.

First, I’d like to take a moment and explain why I have visions instead of goals. I feel that with goals there is an end result whereas visions will have room for creativity and are able to continue long after you and I are gone. Second, my vision with social media is as simple as getting the CGEA and our endeavors out there online to encourage more branches to get involved with their local communities, whether it be through their own competition or general goodness.  Long term visions include social media awareness, and community outreach.  Overall not only will the CGEA have great public relations but also the Coast Guard personnel and they will be proud of our CGEA.

Why do you feel you are a good candidate for the applied position?

I feel I am the best candidate for this job because I have a passion for the CGEA, and the people I will be working with. I believe leadership is not about the position held its more about the passion for excellence and how you make a difference. I bring value to the table; I know what it’s like to struggle. I also know what it is like to have poor leadership and wish to have a positive impact in the lives of others. I truly want to make a difference. I want to help the people above me and below me understand the CGEA’s full value. The Chiefs Mess is a lot to live up to but with leaders who have the drive and passion we can be just as big. There are more enlisted Petty Officers than there are Chiefs and together we can really help members in their time of need.

YN3 Samantha Edger has worked with me for nearly two years and I have known her much longer. She is devoted to every aspect of her life and maintains a positive outlook even in the most difficult times. She is respected by both enlisted and officer alike and can be counted upon to perform admirably in any situation. YN3 Edger’s attention to detail and quality of work makes her an excellent candidate for National Treasurer. She is a strong Petty Officer and will make an excellent Chief one day. These days fewer enlisted members are involved in our great associations and I can say with confidence that YN3 Edger has and will continue to be a positive role model by engaging in the CGEA. I highly recommend Samantha for the Treasurer position, you will find no one more dedicated and willing to give it their all.

YN3 Samantha Edger should be considered as a strong candidate for the United States Coast Guard Enlisted Association seat as National Treasurer.  I state this in great confidence and with no doubt in my mind. YN3 Edger would willingly and whole heartedly perform the duties of National Treasurer to the best of her abilities.  I corroborate her character as a person and a Petty Officer in the United States Coast Guard.  Her commitment to her fellow shipmates and service is continuously of notice by her constant involvement in the Coast Guard Enlisted Association Training Center Yorktown Chapter and many other events of unit morale and community outreach here in the Hampton Roads area.

I have been stationed at Training Center Yorktown since June, 2015. We work at a training center with about 800 other active duty Coast Guard members. I’d say it took only a few months until I knew who Petty Officer Edger was. The reason I knew her was not because she was an exceptional Yeoman, which I’m sure she is, but rather because she gets involved. PO Edger has consistently taken on leadership roles that have traditionally been performed by much higher pay grades. She has spearheaded several key note addresses during TRACEN Morale events such as the Halloween and Holiday Party. During these events PO Edger has addressed the audience and passed information for the benefit for all. This is something that simply has not been done by someone of her pay grade here at TRACEN Yorktown. I have no doubt that PO Edger will be an extreme asset to the Coast Guard Enlisted Association as your next Treasurer. Her work ethic, outgoing personality and positive attitude is contagious to those around her. I respectfully recommend strong consideration for PO Edger, and I stand by for any additional questions.